How Executive Analysis Could Free Capitalism 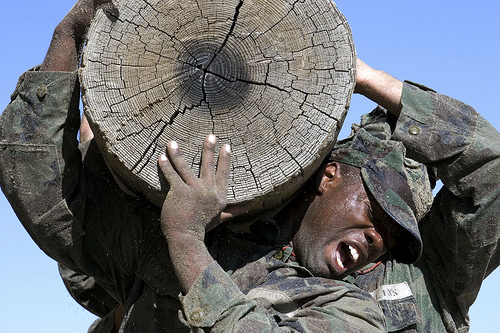 A little while ago I was watching the Military Channel series, Navy SEALs Training: BUD/s Class 234.  Most striking were two seeming contradictory messages instructors were giving.

Winning is often seen as a solitary effort.   About having your fate in your own  hands.  Our movies are set to the theme of the hero and of the heroic journey.  The Summer Olympics that are going on right now are broadcast within this heroic context.  Individuals are profiled, their trials and foibles highlighted, and the glory sweeter as they overcome and achieve excellence even as everyone understands it took a team for them to make their mark in history.

In a country like the U.S., being part of a team can be seen as disappearing as an individual to become a unit that operates as a singular entity without individual exceptionalism.  This conflict about being an individual and being a team member is played out in sports teams dominated by individuals striving to stand out--and apart from their team.

The series depicted a BUD/s training task which had boat teams lifting up telephone poles and running with them.  Something that clearly can only be done as a team.  When the instructors spot someone not putting in maximum effort the whole boat team suffers.  Yet if instructors spot team members excelling at individual tasks without regard to the team, again, the whole team suffers.

Over and over again the instructors rewarded both individual and team winners.  And also punished individual efforts that sacrificed team goals as well as individuals hiding within the team and allowing the team to pickup their slack.

The individual must perform and the boat team must work together.  The difficulties endured my many individuals and teams during the BUD/s training revealed these contradictions and gives clues to the cultural conflicts that occur when simultaneously seeking to take advantage of the power of the group as well as the heroics of the individual.

You'll have to start working in groups if you ever hope to accomplish big things.  There is no question that each individual member must make their effort count for the team to succeed.

Do the cultural themes like the heroic journey of the entrepreneur or the icon of the cowboy of the American West make it harder of individuals to succeed in a project driven world?

When does the time come for an individual to take over from a struggling team to try and make something happen?  Does winning trump learning the value of teamwork?

Darren W. Love
Get My Free Newsletter!
WANT TO GROW? Sign-up for My Email Updates Designed for You.

Check Me Out Here